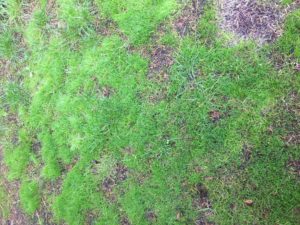 I know this picture doesn’t look like much to you. But actually something remarkable has happened, and this photo is the proof.

You may ask, “What’s so remarkable about scrawny new grass growing in?”

The grass seeds were sown over a year ago, possibly more like eighteen months ago. I can’t say that I actually planted them by the usual procedure. They were truly sown: scattered on the bare dirt in the backyard.

I wasn’t expecting much to come of it, and as far as I could tell, nothing did. I did minor tending of my hoped-for crop, but I knew from past experience that it would be difficult for grass to grow in where running dogs, persistent drought, and ever-increasing shade discouraged new growth. My professional landscaper had already tried twice without success and had asked me not to expect him to try again.

But well over a year ago, I bought a small sack of seed and sowed it. The seeds lay dormant. After five or six months, I gave up on them, and then I forgot about them entirely.  Now, after weeks of recent autumn rains, the seeds have sprouted and taken root. They are growing! New grass is coming up everywhere I haphazardly scattered those seeds.

Then I heard that archaeologists had discovered, in a sealed coffin, seeds estimated to be over 4,000 years old. Being researchers, they had to see what would happen if they planted some of them. What happened was that the seeds took root and grew. They were still alive and viable.

I have to wonder: what seeds have you sown and completely forgotten about—seeds that are just waiting for the right time, the right conditions to sprout? They may be seeds of kindness, of giving, of encouragement, of hope. I have to conclude that the seeds we plant into other people’s lives are just as hardy as those scattered seeds in my backyard and also never die.