My blog entry a few weeks ago entitled “Feelings” brought valuable comment from a good friend who is a spiritual director and writer. Her background includes a long stint under fundamentalist doctrine that discredited feelings as “of the flesh.” She subsequently learned to give credence to her feelings and recognize them as gifts from God – “not to be blown about by them, from one whim to another, but simply to notice and consider,” she said. I think my blog post might have seemed a little too close to that old doctrine, at least close enough to question, and I’m glad she did.

Simply to notice and consider sounds to me like an unbeatable approach to feelings, especially feelings like fear, irritation, anger, disdain, despair, impatience, resentment, mortification. My friend calls her feelings “gifts from God” that have something to say to her, so she would not be so quick to dismiss them as my blog post suggested. I think she’s right and would add only that the noticing and considering might best be done through the perspective of your spirit.

My father’s 106th birthday will be Sunday, November 20. He’s not still living; in fact, he’s been gone for a little over 40 years, but I always remember his birthday. What I most remember about his life is his rage, and most of my childhood memories are of his anger directed at one or another of his children. Forgiveness took me a long time.

My first spiritual director was a sweet elderly nun whom I began seeing more than 20 years after my father passed. When he became the subject of our sessions, she strongly encouraged me to forgive him immediately for those memories, and she was disappointed in me that I couldn’t. Instead, the forgiveness came about in its own time so that I can’t say exactly when it happened, but I’m certain that it was enabled by regular meditation and prayer. These practices put me in touch with Spirit, enabled me to realize that I was not alone, and helped me become a person who could forgive.

Finding peace now in the memories tells me that the forgiveness is real, so however much time it took was the right amount of time. 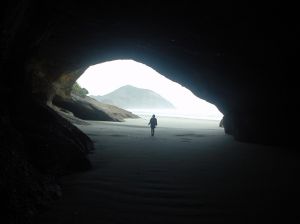 You may have seen the television show Burn Notice. It’s the ongoing story of a discredited spy who is a good guy and very competent operative, but who has been blacklisted from the official intelligence community. The “burned” spy, Michael Westen, provides a running commentary as though he is addressing spies in training.

In a recent episode, Westen says in the voice-over narration: “As a spy, your job is to perform dark deeds for a noble purpose, and that purpose is all that guides you through the darkness. When you lose sight of that, all that’s left is the darkness.”

So, it’s as true for spies as for all the rest of us. Life in general requires us to keep sight of our noble purpose as our best and often only guide through the darkness, because we are certain to experience significant darkness anytime we aren’t holding in mind why we keep trying, why we keep moving ahead. For many, the continuous reminding of that noble purpose is provided by and through our everyday spiritual practices.

Could be that’s the difference between a pessimist and an optimist: the former can’t keep his noble purpose in mind and the latter never lets it slip from view.

We seem to have passed through that period when people self-identified as either spiritual or religious. Remember when you would hear someone adamantly proclaim: “I’m not religious, but I am deeply spiritual”? Well, we’re in a new era now, one in which people are more likely to declare themselves “spiritual and religious.” In fact, the National Survey of American Life, based on a series of studies over the past decade, concluded that 79 percent of Americans – nearly 8 out of 10 – characterize themselves as both spiritual and religious.

What exactly is the distinction between the two?

A few weeks ago I had opportunity to hear Dr. Diana Butler Bass speak on that question, among others. Dr. Bass, whom Wikipedia refers to as an independent commentator on American religion, suggested that when people say they are “religious,” what they mean is that they relate to rules and regulations that are externally authoritative, and when they say they are “spiritual,” they mean they want an experience of connection with God that has internal validity.

For me, that boils down to: “religious” means Bible-based; “spiritual” means meditation-based. And I find myself with leanings in both directions.

If 79 percent of Americans see themselves as both religious and spiritual, no longer much more heavily one than the other, surely that results in society-wide, even culture-wide ramifications.

You can learn more about Diana Butler Bass’s work at www.dianabutlerbass.com.