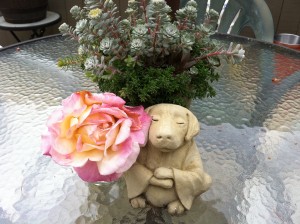 Blogs like this one talk a lot about the sort of dreams we have for our lives—the goals, aspirations, and ambitions people think of when someone says, “Livin’ the dream.”

But the reference in this post is the other kind of dreams, those visions that appear to us while we are sleeping and that we tend to dismiss as “what a crazy dream that was!” We blame the food we ate the night before or the terrible thing we saw on television. The last thing that occurs to us is that the dream was actually a spiritual experience.

The worst thing about these dreams is how ephemeral they are. If you don’t write them down or take some other measure to purposely capture the dream, it is gone from you as completely as though it never happened.

And that would be a terrible shame because there is always a chance that the dream has an important message for you. You can call the source of the message your own subconscious or the universe or God. Doesn’t matter. It’s a source that has a clearer viewpoint on your circumstances than you do.

Sometimes it pays to ask for a dream that will hold a guiding message for you. Just the asking puts you in a frame of mind for receiving. It indicates willingness to take direction, to be open, to listen. Then when the dream comes, don’t edit it. Just be sure to put down on paper every single aspect of it you can recall, especially the ones that you cannot immediately interpret. And this writing down must be done as soon as possible after waking because, like snowfall on a sunny winter’s day, the edges will melt away fast.

Ask for the guiding dream, be open to whatever comes to you no matter how little sense it seems to make at first, write down every detail, ask God for the interpretation, act on what you learn.